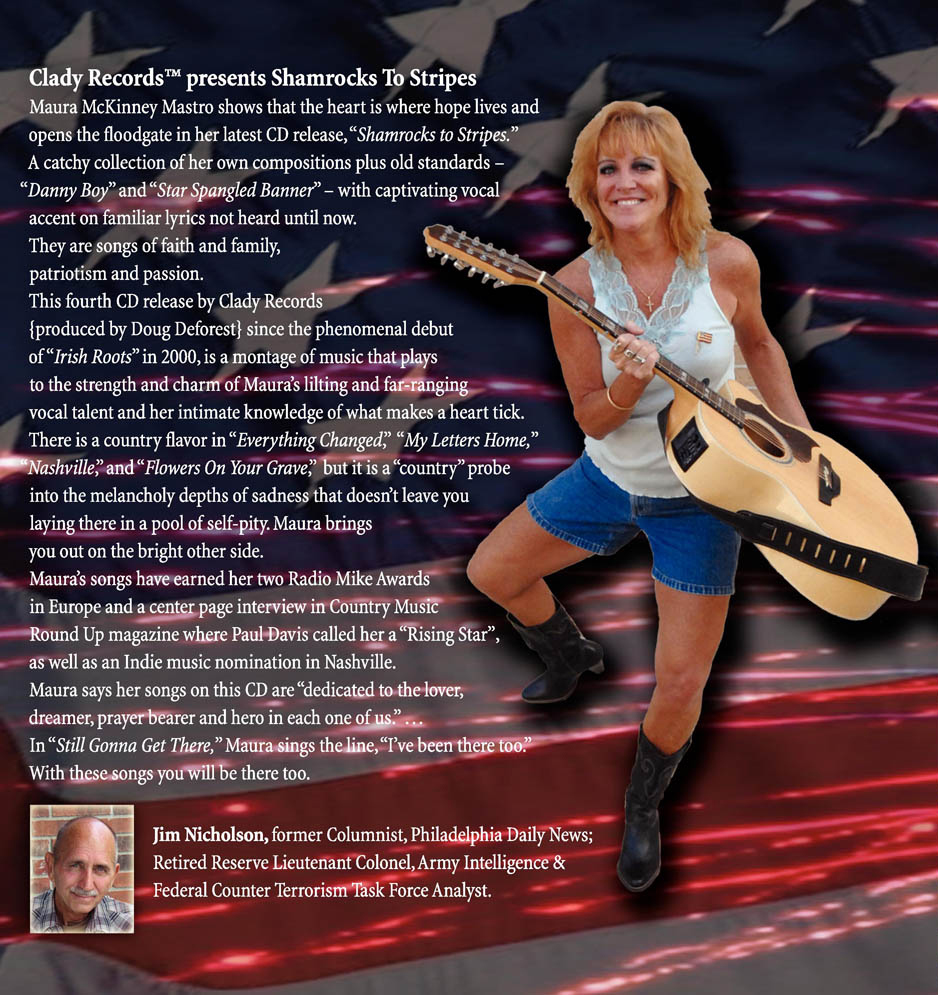 Maura McKinney Mastro displays considerable maturity and pep in front of classy pop-country sessioners.  Enthusiasm for this product is deserved because this is a quality collection parading a girl who has paid her dues. This is an engagingly classic Irish-American pop-country enterprise if ever I heard one! New Jersey's MMM says that she is thrilled when people leave her performances uplifted and inspired. Cheerful, optimistic and compassionate, she says that her music is ministry - writing from the heart, songs of hope-and-faith. Superbly rich in sentimental zeal, this efficient suite of 15 tracks is a reminder of MMM’s skill and controlled passion on secular and religious repertoire. Let’s hope that she gains a solid foothold in Europe as well as in the New World. She pursues a spirited Irish gal' style that could give some of her Irish cousins a good run for their money. 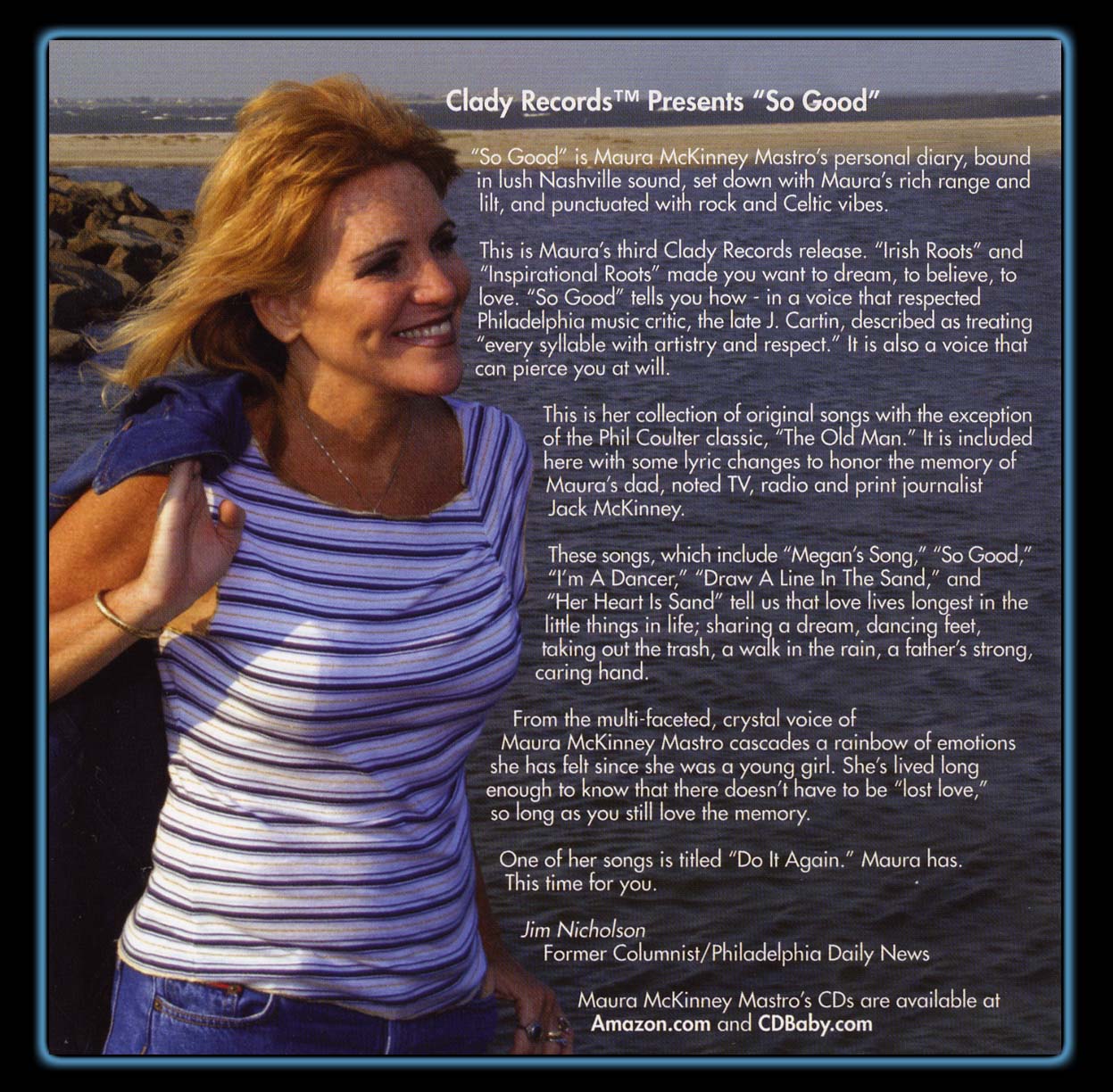 …Maura McKinney Mastro is known for her graceful voice, energetic performances and inspiring original songs…It’s been a whirlwind of a career for Maura. From taking the main stage during North Wildwood’s Annual Irish Festival to singing in front of thousands at sporting events, Maura loves everything about singing, dancing and entertaining.

Maura and her husband Frank entertain audiences all over the country including cruise lines, casinos, nightclubs and resorts with their energetic celebrity impressions show…

When not performing with her husband, she can be seen locally on stage belting out melodies from her new Cd, “So Good” as well as cover tunes at McGillicuddy’s in North Wildwood.

Maura is proud of her newest  CD, “So Good” which is an encompassing statement of her life’s journey. She uses it to shine , love aspire, dream and remember…Music critics are also picking up on Maura’s works (See Jim Nicholson’s Review). She kept the memory of her father alive by including her rendition of Phil Coulter’s, “The Old Man”. With Phil’s permission, she changed some of the lyrics to honor and cherish the memory of her father. So much recognition has been given to Maura’s latest treasure, it has even been getting a lot of airplay in the southern states.

Maura also sings the National Anthem for Philadelphia teams. Last Sunday, she sang the anthem for the Phillies in the beautiful new Citizens Bank Park…

The beach, the ocean, the shore’s atmosphere are inspiring for any artist. For Maura, she says, including her career, “It is all a gift from God”

Maura’s first CD, “Irish Roots” was released in 2000. “This CD was inspired by my father”, says Maura. “He really encouraged me to learn those songs as he had a great passion for the stories behind them. It was a heartfelt project for that reason - my Irish Roots.” Before Maura’s father passed away he encouraged her to keep recording.

Maura’s next Cd was “Inspirational Roots” where many of the songs are originals with a mix of classics like “America The Beautiful” and “Amazing Grace”. It came at no better time when America needed a little inspiration after the 9/11 terror attacks. The CD was also a source of comfort for Maura because just days after it was released her father passed away.

This country-rockish enterprise finds Maura in a driving tone well-suited for the varied repertoire paraded in front of edgy country-rock sessioners. Well-titled, bold, upfront and in-your-face, this is country music a la ‘Las-Vegas-style’ (edging on rockabilly-pop) rather than Nashville. This innovation is for me; catchy tracks that feature quality self-penned repertoire from the art of a rising star. Not dutifully produced, and in most cases not telling some sort of cheating, heart-tugging ‘love-lost’ tale but positive uplifting lyrics with bounce-and-beat or a pleasing crooning sentimentality. As a subspecies, this album is relatively atypical and therefore should be sought out by the country devotee. Of ‘Irish- origin’, this was interestingly recorded in the northern environs of New Jersey and the southern environs of Arkansas. Fascinatingly recorded well, the guys and the gal exhibit enterprising skill and originality for those who enjoy the free-highway rather than a rocking-chair porch.

Country Music Round- Up Magazine/ August 2006

Here is an excerpt from Richard Curlett's  November, 2005 review in the Northeast Times

Maura and Frank Mastro were show stoppers...what a wonderful show for the holidays!

Whether sung with a bounce or the blues, Maura's vocals transport you to places traveled and places dreamed… Maura always brings the audience to an intimacy with her songs whether performing in a cabaret, ballpark, cruise ship or any stage.

As a singer, (Maura) can put more energy and feeling into a song than anyone I’ve heard in a long, long time. There’s a special quality there, kind of an honest simplicity that reaches the audience – and me – on a direct emotional level. That may be the key…

“Maura McKinney is an absolutely super singer and songwriter who’s been wowing them at local clubs and concerts…watch for an inevitable recording contract to come soon”.

Audiences will get a chance to preview Maura’s Irish Festival appearance when she sings at McGillicuddy’s.She will perform many nostalgic  and contemporary favorites as well as passionate offerings of Irish, inspirational and country rock selections. Maura’s new CD, “So Good” contains original, country-pop songs written or co-written by her. Most of the vocals for “So Good” were recorded at Raney Recording in Arkansas on the way home from gigs out west. The CD features outstanding musicians from Nashville and Houston. “It’s always nice to perform throughout the nation” said Maura, “but Frank and I enjoy coming back to our home to perform before old friends and meet new ones here”

From the intimacy of small cabarets to the glamour of showrooms to the wide open spaces of major league ballparks & sports arenas, audiences have delighted in Maura's soaring vocal range and her moving interpretations of old standards, contemporary popular music, songs of inspiration, country, rock and folk tunes; as well as her own melodic compostions.

…The McKinney’s daughter, Maura, inherited her mom’s beauty and talent, and is herself a recording artist. On the night before Jack McKinney was laid to rest, his memorial service was held at historic, St. Augustine Church in Philadelphia. …Jack’s son, Brendan presided. Jack’s daughter, Maura sang…friends including Larry Merchant and Stan and Gloria Hochman, spoke. It was a beautiful ending for a fascinating life…

…Neither Cooper or Wilson made much of an impression on the approximately 600 Friday night fight fans. There was a long delay before their appearance which was partially filled with singing by Irish singer, Maura McKinney Mastro, daughter of deceased Daily News fight writer, Jack McKinney…(Maura) grabbed the fans’ attention with her heart wrenching tribute to her father…

“Headed for the Big Time is Maura McKinney, the singer-songwriter who is currently wowing them in New Jersey…she comes by her talents naturally – she’s the daughter of  singer, Doris Kavanaugh who is now headlining in Wildwood. Her father and the man who bought her her first guitar, is Daily News writer, Jack McKinney. With parents like that, you know Maura’s gotta’ be terrific…”

The dyn-o-mite Maura is a bundle of energy and talent. She can be bold and brash or mellow and mild.

And giving the festival a big local Irish touch will be singer Maura McKinney Mastro... about as Irish as you can get without coming from Ireland...The daughter of the late, Jack McKinney, Philadelphia columnist and sportswriter for the Philadelphia Daily News, and singer, Doris Kavanaugh, Maura has a repertoire that includes many Irish songs and many songs written by her. One of her three CDs in fact, is titled "Irish Roots."

Maura will be performing on the main stage of the festival on the nights of September 23 and 24. I caught Maura performing recently and with her guitar and song she really lit up the crowd.

Maura is one busy entertainer. Her new CD, "So Good" is being circulated in the southlands. She recently sang the National Anthem at a Phillies game... As a teenager she wrote and recorded, "Philadelphia Eagles, We're Number One" which she recently, re-recorded and hopes it will bring good luck for the Eagles in their quest for a Super Bowl victory.

On top of all this Maura sings Inspirational songs and often performs at Campground meetings for her friend, the Rev. Dave Bailey, founder of Ranch Hope. There will be no rest for her and her husband, Frank Mastro after the Irish Festival...